Dave shares his experiences of getting active, and his thoughts on the issue of representation that the age-positive image library was created to challenge. 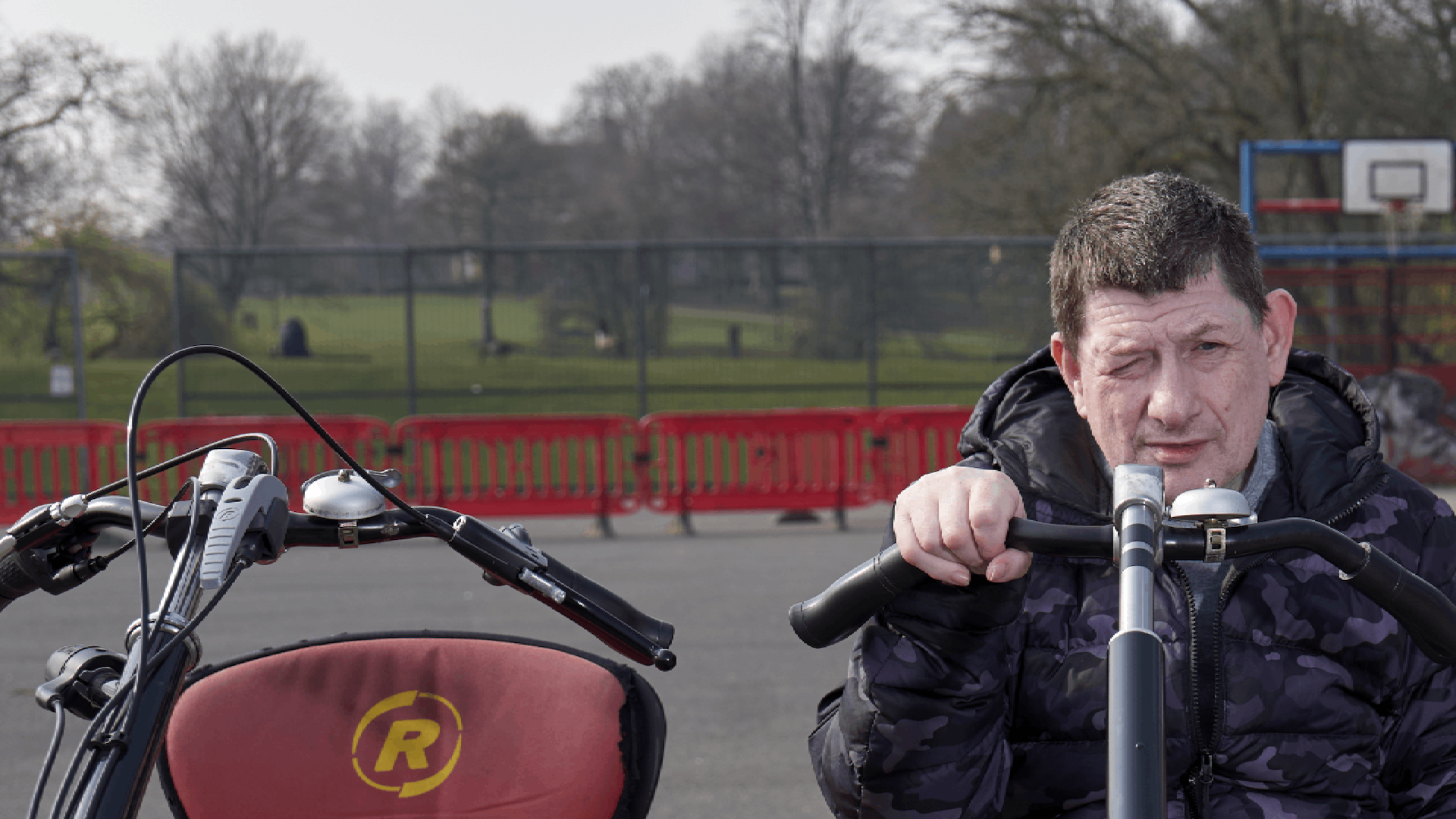 Dave, who has been registered blind for his whole life, grew up in Sheffield with his family, where he still lives today. Nowadays, Dave is a regular at Sheffield Cycling 4 All (SC4A), a charity that focuses on inclusive cycling, running all-ability cycling sessions with a range of trikes and bikes. But this wasn’t always the case – while he’s appreciated the benefits of being active as a regular gym-goer, he’s viewed accessibility as a barrier to other types of activity.

Being registered blind Dave often has difficulty walking in the street by himself, so he usually has someone with him to help. However, this hasn’t stopped Dave from going to the gym, something he does at least once a week. His gym is very accommodating, but Dave notes that he seems to be the only Disabled person that goes there regularly. As a fan of his local football team, Sheffield Wednesday, Dave also regularly visits Hillsborough Stadium.

Dave had been active long before he found out about SC4A but its impact on him has still been massive. He recounts the first time he was introduced to SC4A, when he was walking through the park. Dave remembers being quite dismissive of the idea at first, saying ‘that’s no good for me, I won't be able to see what I'm doing’. However, when they showed Dave the range of adapted options they had on offer, specifically the side by side which he’s been pictured on, he said ‘I’ve been going ever since’; this was in 2018. 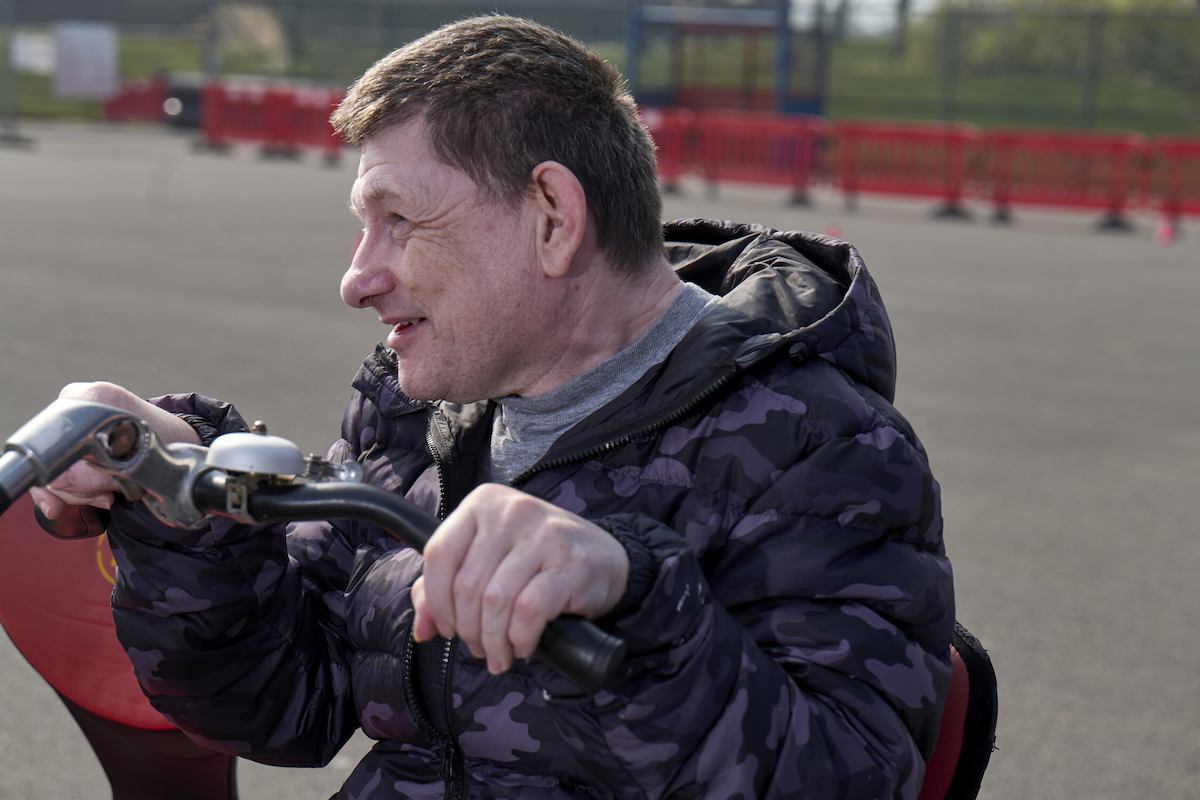 When asked what being active means to him, Dave replied saying it means being stimulated and that it’s important as you age, otherwise you stiffen up. For Dave, the benefits aren’t purely physical, but social as well. Before the pandemic, he says, SC4A had a real sense of community; people would come in the morning and stay till dinner time, with tea and biscuits, and chit-chat all on offer. While Dave misses the social aspect, he says even so without the bikes he’d just be stuck in the house. When Dave hasn’t got anything on, like many of us, he struggles with boredom and that the cycling acts as an outlet for this.

When speaking about Picture Yourself Active – our campaign to depict older and Disabled people getting active to challenge pervasive negative stereotypes – and the issue of representation, Dave believes there’s an attitude towards Disabled people in this country, and that there’s a similar one towards older people as well. He thinks that there’s a big problem with accessibility and the exclusion this brings, but it’s mostly just down to how people think. Comments like ‘he can’t do that because he’s in a wheelchair, she can’t do that because she’s in a wheelchair, it’s absolute nonsense.’ He uses the Paralympians and their achievements as an example, then asks rhetorically ‘you tell me, is someone going to say to Sarah Storey she can’t cycle and win all those medals?’

While Dave feels that these attitudes are still present and we have a long way to go, he recognises how much things have changed in his lifetime. Things have got better ‘purely and simply because of the Paralympics being on television’ he says, and that before the late 1990s Disabled athletes just weren’t well known. The increased media coverage of the Paralympics, and the interest this generates, has helped change people's attitudes and should be celebrated as an example of what representation can do.

But why, Dave asks, is it only confined to the games – the Paralympics, the Commonwealth, the Invictus? Why does this media interest not extend to the realm of parasport more broadly? Dave points out that most people probably can’t name any other parasports that are broadcast on television.

This type of representation matters and ‘it’s very important’, Dave says, as some people just don’t get out of the house. He thinks back to a time when he just didn’t want to leave his home and while he was encouraged to get involved with SC4A, this isn’t the case for everyone. Representation can be used to inspire, as Dave says, when you begin to show people what is possible, they might well think ‘why can’t I do that?’