"I’d say Britain is ageist. I hope that it’s getting better, and I think that over time attitudes will improve." 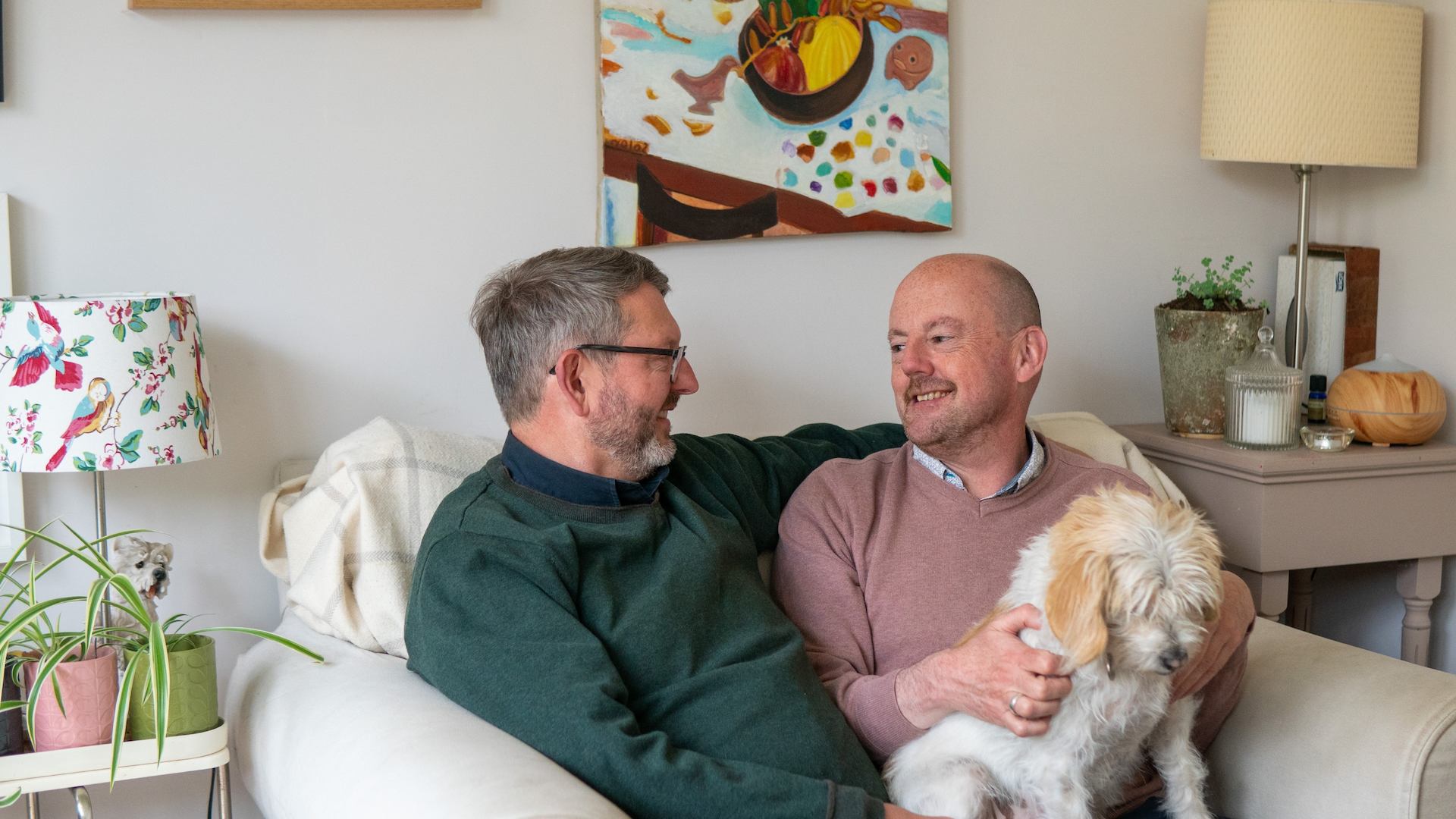 Michael, aged 54, writes about his experiences of being an older LGBT+ person and how we should remove barriers so that we can all age equally.

My partner Johnny and I have lived in London Fields, Hackney for 17 years. Our rescue dog Lulu joined us at the start of the COVID lockdown. I grew up in King’s Cross, so I haven’t really moved that far!

On attitudes towards the LGBT+ community

I’ve always been relatively lucky. I’ve been out at work my whole life. I’ve had a bit of homophobia, but compared to how it was, so much has changed for the better.

Like when you watch things like It’s a Sin (2021) and Pride (2014), the language the media used in the 80s is so derogatory compared to how it is now.Being able to get married and have civil partnerships, that’s helped leaps and bounds. But I think it’s still a struggle, there is still prejudice going on.

My husband is a cognitive behavioural therapist. He’s pathologically kind! He’s all empathy and I’m like... no empathy. So, I suppose opposites attract!

Now we’ve been married for 10 years this year and together for 17. We got married in Old Finsbury Town Hall, where my parents first met. Both our parents had died by then, so we wanted something that commemorated that.

On working and volunteering

I gave up full-time work around four years ago. I suppose I’m quite lucky in that we’ve managed to pay our mortgage. Saying that, I do still work. I’ve just finished doing some work for an energy co-operative which helps people in fuel poverty. I was working on a scheme to help people on low incomes or in private rented accommodation who can't afford to make their home more energy efficient.

So many people that I speak to on the phone just live in really damp houses. Perhaps their landlords aren’t great, and they’ve got broken windows or no insulation. So, whatever they’re spending on gas and electricity just goes out the walls half the time. Their bills are shocking. That’s why energy efficiency is so important. I feel really passionately about that.

I’m a very keen environmentalist, so I’m always trying to get friends, family and neighbours to be greener. We have solar panels, an electric car, we are (almost!) vegan and we’re going to get a heat pump.

I also volunteer at the Hackney Food Bank. Volunteering there came from my concern about food waste and people in Hackney and throughout the country who can’t access food. There’s a real disconnect between those two things. 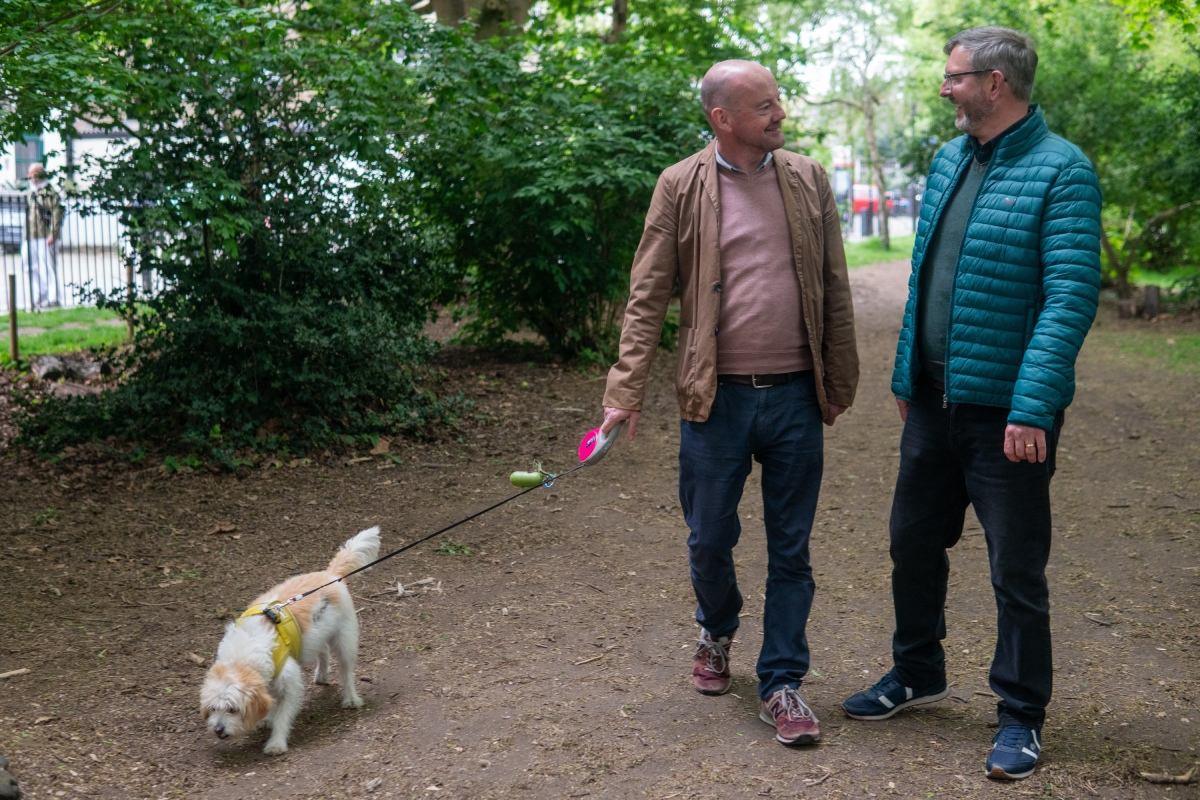 Michael, his husband Johnny, and their dog Lulu.

As I’ve gotten older, my ideas of what ‘old age’ is have changed. If you’d have told me when I was 20 about a 50-year-old I would have thought ‘Ooh my god they’re so old!’. If I was to say what ‘old’ is now, I’d probably say early eighties or something.

I don’t really feel any different now than I did about 30 years ago. Even physically I feel the same. We swim all the time and cycle. It’s just removing those barriers in your mind. My aunt was obsessed with being old, and when she turned 70, she said, ‘Oh I can't do that anymore, I’m too old’. Well, you can! It’s just your mind telling you that you can’t.

I’d say Britain is ageist. I hope that it’s getting better, and I think that over time attitudes will improve. As you get older there are big health inequalities. I’m in my 50s and in good health, but that’s because I live a fairly cushioned middle-class life. Whereas someone who's living in poor quality accommodation is much more likely to have poor health. My friend went to an interview recently, and he’s around 54. I wonder if his age will be a barrier. Even if legally it’s not allowed to be, will the employers look at him and think he looks too old?

It can be lonely getting older, I think, as you often have fewer people that can help. Older people to a certain extent are ‘written off’, they’re less seen I’d say.

Until we recognise and address these inequalities then we’ll be an ageist population. Not everyone’s ageing equally.