“Over time, things do get better and improve. Nowadays, I think generally the whole atmosphere for people who are LGBT+ is much better than it used to be.” 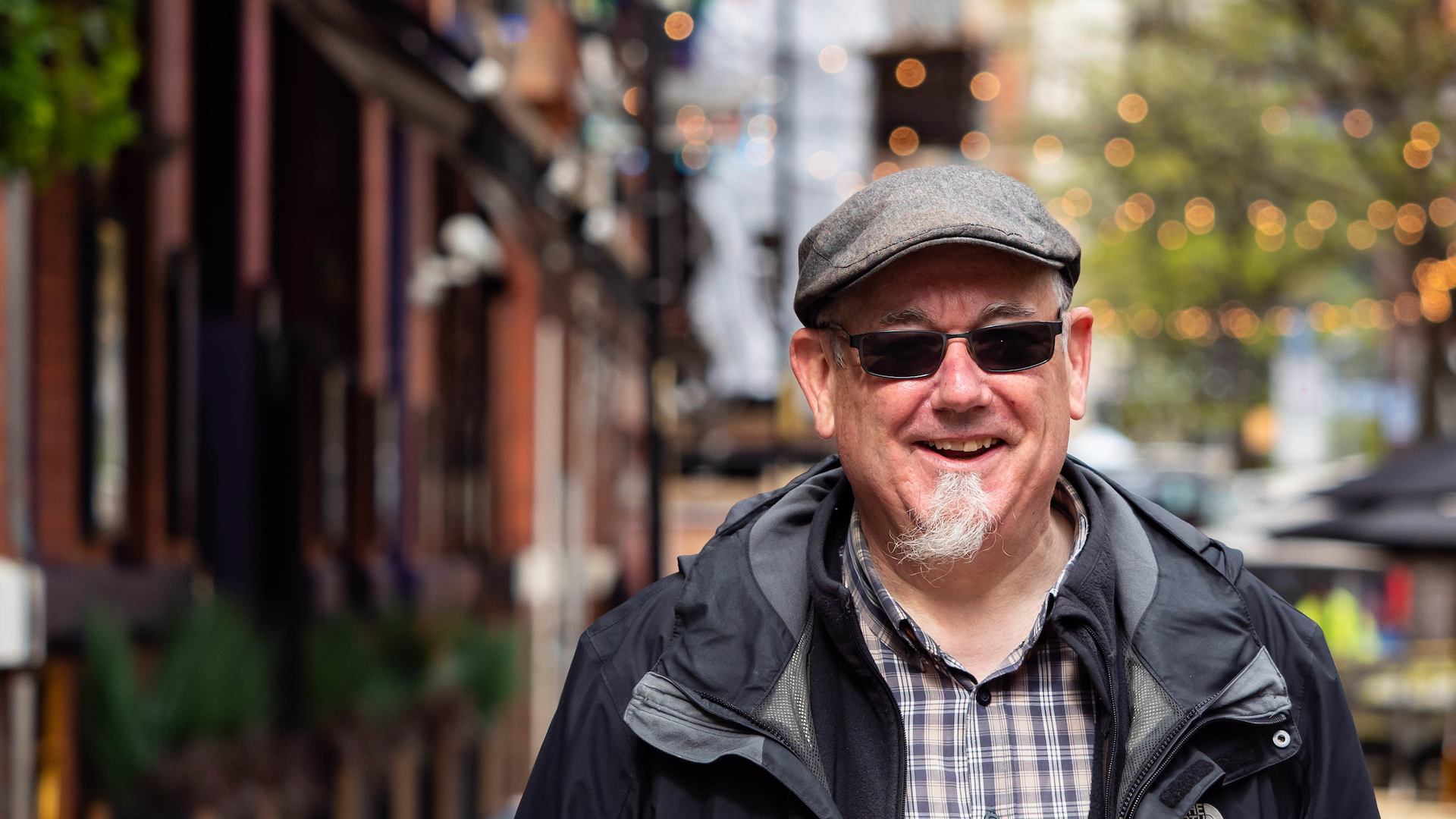 To mark Pride Month 2021, Tony talks about how attitudes to sexuality have changed, running the support group ‘Out in the City’, and his plans for sharing LGBT+ history with younger generations.

I’m 66 now, I knew I was gay 50 years ago when I was 16. So much has changed in that time. For example, I lived in Bolton, which is quite a large town, but I only found out when I was 20 that there was a gay club about one bus stop away from where I lived! In those times there was no information, this was obviously before the internet. Nobody talked about being gay, what that meant, and you didn’t know who to turn to.

I was lucky that I found Manchester, only about 15 miles away, and it had an LGBT+ youth group. Once I got involved in that, I made friends and found contacts through there. I’ve lived here for 37 years now.

However, there have been a lot of painful things that have happened. When I was 21, I moved out of my parents’ house into a house share. I got evicted from that house for being gay. Our landlord had a solicitor that said, “This man is a homosexual and it’s outrageous”. I was evicted from the house. I had to leave in seven days.

One of the most difficult things in my life is that I had a partner for 31 years and he died very suddenly with cancer. When we got to the bereavement centre, the woman there asked if we had a civil partnership (this is before marriage came in). I said, “No we didn’t have a civil partnership, we lived together for 31 years.” And she said, “Not next of kin then”. It totally disregarded our relationship.

Honestly, I wouldn’t change things. I don’t have regrets about horrible things that have happened in my life, it’s just part of life. It’s what we’ve lived through. For the future, I look forward to doing things in a positive way.

Over time, things do get better and improve. Nowadays, I think generally the whole atmosphere for people who are LGBT+ is much better than it used to be. Because of the equality act, things have improved so much.

For the past three years, I’ve been running a project linked to Age UK Manchester called ‘Out in the City’. We are basically an LGBT+ social and support group; we have weekly meetings and have activities and after the easing of restrictions we’ll be organising days out. The group has provided important support for people in lockdown. A lot of us live on our own and we don’t have family members and so on, so it’s been a great help. It’s just fantastic, exploring and being in a group of likeminded people.

I’m also involved as a community member with a housing project called ‘LGBT Affirmative Extra-Care’- it’s a scheme with the LGBT Foundation. It’s going to be about 90-100 flats, all new build for older people, the majority of whom are LGBT+. This will be a house for life, so they’re looking to accommodate range of people from no care needs to people who might have quite high care needs.

We have meetings to discuss things like safety, design, the layout, what facilities will be there. It's really interesting, you learn a lot. You don’t realise how long these things take – years and years! But we’ll get there in the end. It sounds like a really great place and it’s only about a mile away from where I live now. I’ll definitely be applying to live there when it’s been built! 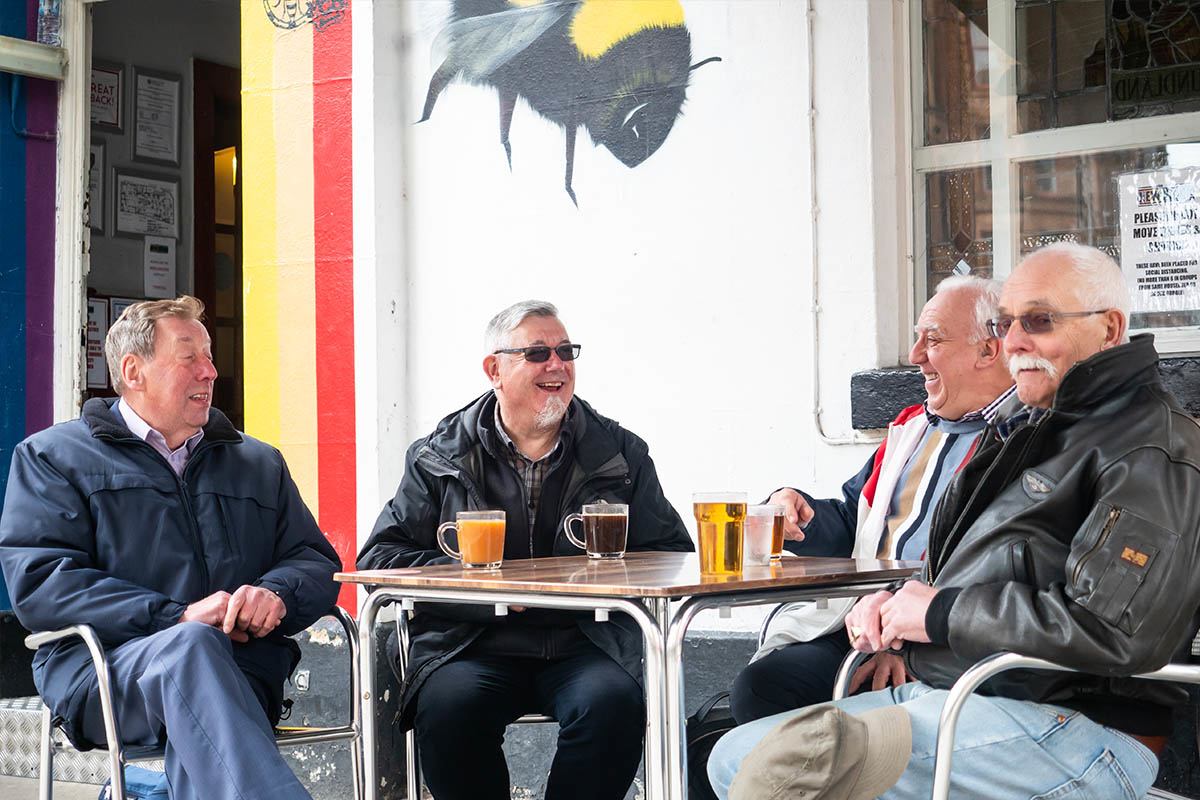 Looking forward, I want to teach younger LGBT+ people about our history. There are young people growing up now, who see marriage between a man and a woman, or two women or two men as just natural, and I think that’s really great. But I have a sneaking suspicion that most younger people don’t really know about our history. Things like the groups like ‘Act Up’, campaigning, and going on marches. I’m not sure they know about those things, how we had to fight for our rights. I'd like them to know about it. One of the things I want to do with ‘Out in the City’ is try and get some intergenerational meetings with LGBT+ people, we have lots of stories we could tell.

Honestly, I wouldn’t change things. I don’t have regrets about horrible things that have happened in my life, it’s just part of life. It’s what we’ve lived through. For the future, I look forward to doing things in a positive way.